Message from the Chair
From a Welfare State to a ‘Civil’ Welfare model
Fondazione Terzo Pilastro and the role of the Mediterranean region.

Third Pillar: the non-profit world is the only valid alternative to the Crisis of the State
and the market and to meet the community’s inevitable needs.

Manolo Valdés, an internationally renowned artist, returns to Rome after 25 years (Galleria Il Gabbiano, 1995), with a solo exhibition titled Le forme del tempo (The Shapes of Time) held in the magnificent halls of the Museo di Palazzo Cipolla. The exhibition has been strongly advocated by Professor Emmanuele F. M. Emanuele Chairman of Fondazione Terzo Pilastro – Internazionale that promoted it and organised POEMA in association with the Contini Gallery in Venice supported by Comediarting and Arthemisia. The exhibition is curated by Gabriele Simongini.

700.000 euro for Families in Difficulty from Fondazione Terzo Pilastro

A real and immediate solution to meet the basic needs of Italian families who have  been hit by the economic crisis generated by the lengthy lockdown due to COVID-19: this is the honourable initiative launched by Fondazione Terzo Pilastro – Internazionale, which places 700.000 euro at the disposal of seven cities in Southern Italy to be distributed in food vouchers, thanks to the generous vision of the Chairman, Professor Emmanuele F. M. Emanuele, who has always been sensitive to the needs of the most vulnerable classes of society.

Within a week two distinct awards have been conferred to Professor Emmanuele F. M. Emanuele Chairman of Fondazione Terzo Pilastro – Internazionale for his passion and commitment to culture during two important events. 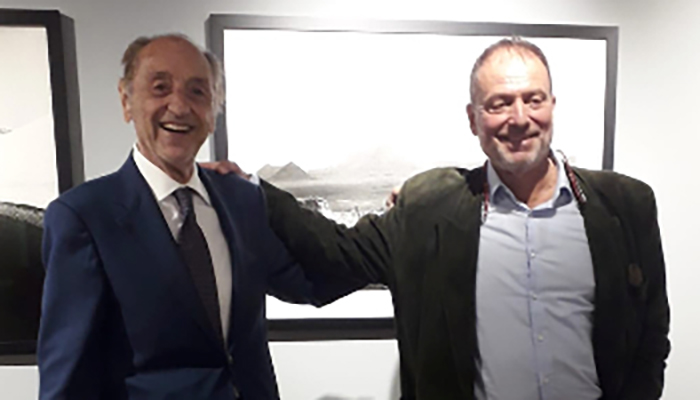 John R. Pepper’s photographic exhibition titled “Inhabited Deserts” opened on the 3rd of October 2020 in the beautiful scenery of the historic centre of Todi. The exhibition has been produced by the Comune of Todi with the essential contribution of Fondazione Cultura e Arte, a branch of Fondazione Terzo Pilastro – Internazionale chaired by Professor Emmanuele F. M. Emanuele, in cooperation with the Embassy of the United States of America in Italy and is curated by Gianluca Marziani, co-curator Kirill Petrin.

‘Sea Without Barriers, was held on the Lungomare di Scauri (Formia) on the 18th and 19th of September 2020, the second festival in dragon boats and rowing regattas, achieved this year too through the contribution of Fondazione Terzo Pilastro – Internazionale chaired by Professor Emmanuele F. M. Emanuele and organised by the Reali Canottieri Reggia di Caserta, an association chaired by Roberta Reisino, creator of the historical contest between the Oxford and Cambridge crews on the Fountain of the Dolphins for four editions in synergy with the amateur sports association ‘Nautilus Scuola di Mare’.

The opening ceremony of the birthplace of Ignazio Silone in via delle Botteghe was held on the 10th of September 2020, following important restoration works made possible through the contribution of Fondazione Terzo Pilastro – Internazionale and the Comune di Pescina. Having obtained all the permits to commence the comprehensive renovation plan, in spite of the health emergency lockdown and the measures adopted to control Covid-19, the restoration works were completed on the 12th of August.

The Sportello della Solidarietà was created for the purpose of encouraging and supporting the accomplishment of social projects based on the values of solidarity, mutual aid, social inclusion and the promotion of underprivileged groups. Non-profit organisations may apply for grants for projects in the following fields Health;Education and Training;  Art and Culture; Scientific Research; Aid to the Underprivileged READ MORE >>

Message from the Chair

Terzo Pilastro: the non-profit world as the only valid alternative to the crisis of the State and the market, to meet the inescapable needs of the community.

Fondazione Terzo Pilastro - Internazionale operates in the fields of Health, Scientific Research, Aid to the Underprivileged, Education, Art and Culture and, in the latter sector, acts as a trait d’union between Mediterranean cultures.

Since the Foundation was established for the purpose of paying more attention to the neglected regions of Southern Italy and the Maghreb most of its activities were initially performed in Southern Italy and the Mediterranean Region. In the past two years it has also been engaged in boosting philanthropy and culture in the Near and Middle East.

In fact, everything beautiful surrounding us originated in the Mediterranean region: poetry, literature, art, education, monotheistic religions, philosophy and democracy.  I have focused on this environment ever since I was young.  Some say this is because my personality was certainly influenced by the great leading figures in the history of humanity who lived in Sicily, my homeland, such as Roger II and above all Frederick II, who preferred to be called King of Sicily rather than Holy Roman Emperor or King of Germany and loved the Mediterranean region immensely.  This man embodied all the excellences of human intellect: he was an eminent jurist, a legislator who reformed the administrative structure of the State, a man of letters, poet and a farsighted philanthropist with progressive ideas.  He started the process of integration between the Greek, Latin, Arab and Jewish cultures and even invented a Romance language, to enable communication between the various ethnic groups, and reached agreements, without bloodshed, whereby Christians were allowed to enter Jerusalem… and much more.

Since it was established, Fondazione Terzo Pilastro has accomplished many projects in this regard: first and foremost it has opened several representative offices in the regions of interest (Catania in Sicily; Cosenza in Calabria; Naples in Campania; Rabat in North Africa; Madrid in Spain and finally in Malta), in order see first-hand the local entities and create strategic operative centres in the relevant regions.  Furthermore, over the years the Foundation has created and completed, in a progressively more structured and systematic way, many education or cultural projects of high socio-economic value in most of the Mediterranean basin and subsequently increasingly more towards the East until reaching Russia and China even becoming directly involved, with efficacy, in the neediest countries.  Please refer to the two activities macro-sections named National (Southern Italy) and International (the Mediterranean region and the East), for a detailed and complete survey of the international projects completed by the Foundation in the last decade.

All of these important projects received impressive feedback even if the current, widespread geopolitical crisis is objectively holding back the Foundation’s operations.  We hope that this is just a temporary crisis so we may resume the course we have started as soon as possible, even in the most troubled spots.